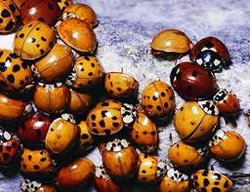 'Ladybug, ladybug, fly away home.
Your house is on fire and your children are gone.
All but one and her name is Ann,
And she crept under the pudding pan.'

There are many speculations about the rhyme’s origins and meaning. One theory is that it relates to the view and handling of those practicing paganism in Europe. The belief is that the rhyme originated about the time Christianity was peaking. Prior to the emergence, the Ladybug was seen as a symbol of goddess worship. The line, 'ladybug, ladybug, fly away home' is a reference for pagans to go underground. 'Your house is on fire and your children are gone' seems to be referring to destruction of pagan temples and the exodus of followers. The last lines of the rhyme, 'All but one and her name is Ann, and she crept under the pudding pan', are referring to pagans that have gone into hiding.

Another theory is that it originated after the harvest. In the spring farmers would release thousands of lady bugs to protect their crops. When it was time to burn the fields for the following year, the farmers would sing this rhyme to drive the ladybugs away and keeping them safe.

Some individuals think the word ladybird came from the Catholic phrase "Our Lady.”  The practice of reciting this rhyme was thought to have been used as a warning to those, mostly Catholics, who declined to participate in Protestant services, which had become mandatory since the Act of Uniformity (1559 & 1662). This law made it illegal for priests to say Mass and disallowed parishioners to attend. As a result of this Act, Mass began to be held in secret in fields. Those found guilty of violating the Act were subject to imprisonment and fines and priests to execution. Many priests were executed by being burnt alive at the stake or in some cases being hung, drawn and quartered.